The German guitarist, Susan Weinert, has played herself a stable place in the league of leading guitarists in more than 3000 concerts around the world. Her powerful style, virtuoso way of playing, unforgettable sound and innovative, highbrow composition call to impressed groups of fans all over the world. Although Susan Weinert constantly is asked to play for internationally successful music bands as a guest solo for their concerts, the guitarist is still determined to develop her own music. 11 albums released worldwide containing compositions penned by herself bear witness to her creativity and determination.

In her new project Susan Weinert [Global Players Trio]
has collected musicians who have been around the world themselves and can contribute their experiences to Weinert's compositions. This creates a completely new sound and the mixture of the different styles of music allow Susan Weinert's already expressive music to shine in a new light.

With David Kuckhermann, from Munster - north west Germany, Susan landed a musical magician in percussion, who knew how to deal with all percussion instruments from all over the world and created a completely individual character making him unique. David Kuckhermann is a pioneer in hand and finger drumming. After studying for years under masters such as Glen Velez, Behnam Samani, Ramesh Shotham and Fayaz Khan, David quickly found his own unmistakable style, which he developed on the basis of merging the playing techniques and rhythms of the great hand drum traditions in Iran, India, Egypt, Europe, Turkey and different countries on the African continent. David Kuckhermann spends most of the year journeying the globe. When he is not giving concerts himself, or teaching in workshops, David meets with other musicians and continues to research the fascinating musical world of the hand drum and, by doing this, extends his already rich palette of rhythms and timbre.

The bass has been trusted to Susan's husband and musical companion of many years, Martin Weinert, who has co-produced all her albums and whose melodious accentuated bass playing style has become an integral part of Susan Weinert's music.

The Susan Weinert [Global Players Trio]
project lives from the individual souls of the musicians. Susan Weinert's warm guitar sound, coupled with her virtuoso technique creates its very own musical cosmos and driven by David Kuckhermann's impressionist fireworks on the percussion and both built on the deep melancholic played by Martin Weinert a new individual musical sound, a tapestry of haunting harmonies and woven rhythms, which carry the listener on a magical musical journey. Emotions expressed through music turn every concert into an individual work of art. 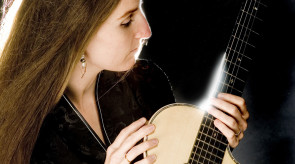 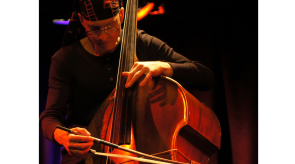